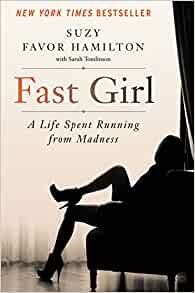 In my early twenties, I worked the front desk at a print shop in Madison, WI. One of our vendors enjoyed talking about a relative who happened to be an up-and-coming local track star around my age. He was quite impressed with her accomplishments, but not being a sports fan I didn’t pay much attention. The way he kept bringing her up (“She’s really cute…” in what I took as a “nudge, nudge, wink, wink” tone) it almost seemed like he was trying to set us up. At the time, however, I didn’t possess the self-confidence to vet that theory.

I hadn’t thought about this for many years, until I ran across an article about how Suzy Favor Hamilton had followed up her Olympic career with a stint as one of the most sought-after escorts in Las Vegas. What? The quintessential midwestern home-town sweetheart? It proved quite easy to confirm the story, as she has written a biographical bestseller detailing what was revealed to be a long battle with bipolar disorder (and with her antidepressant medication.)

“Fast Girl – A Life Spent Running from Madness” works on different levels. It’s an accessible expose of both the high-end escort business and the mental health industry. It’s also an entertaining page-turner of a fantasy adventure. More than that, it’s a cautionary tale about running from one’s problems.

Having lived my life in and around Madison, I was amused by all the local references sprinkled throughout the book. Laudable, though, was the complete absence of any references to cows or cheese. (Further, the only beer mentioned was both brewed and consumed in other states.) Still, there were plenty of landmarks and locations that made me think “I’ve been there!”

Fast Girl is smart, sexy, and real. I found the narrative a little too cozy with mainstream views on psychopharmacology for my taste, and some could see it as just so much excuse-making for selfish behavior. Since I haven’t run the proverbial mile in her shoes, I choose not to judge but to enjoy the ride and hear the warnings. I recommend it to anyone interested in Suzy’s career/s, or in mental health issues.